Let’s talk about some key players in the food web that are not primary producers. What do vultures, slugs, and fungi all have in common? That’s right! They are all nature’s undertakers. But there is another interesting “undertaker” that lives right “under” our feet… the burying beetle. These Nicrophorus beetles are colorful, large carrion beetles.

In Oregon we have an orange and black burying beetle that is more than an efficient consumer of small, dead animals such as mice and birds, they are also recyclers of nutrients in our ecosystems. Using their antennae equipped with distinctive chemoreceptor “clubs” that look like orange balls waving in the air, they can sense a carcass from a great distance and fly to it. By burying these carcasses, they help to reduce odor and fly populations. In addition to their critical role in the food web, these beetles use animal carcasses to house and feed their young.

Aside from social orders of insects such as bees, these beetles display very rare and intense paternal care, in which both the male and female beetles feed their young in response to begging, much like a baby bird. But to start a family, a male beetle must first locate a suitable carcass and then attract a mate. The pair then removes the hair or feathers from the carcass, and embalms the body with antibacterial secretions that help to slow decomposition and avoid drawing competing critters. If neighboring predators do threaten their food supply, these feisty beetles will fight them off. Using the stripped hair or feathers, a burial pit is lined in the soil where the carcass is stored, crypt-like, until it has been completely utilized by the beetle family. The entire burial process only takes about 8 hours!

When disturbed, these beetles produce a raspy, buzzing sound, similar to a bee, which is how they might be found during their nocturnal activities. These “Grave-Diggers” of the insect world are important to humans as they efficiently transform organic nutrients – of what would otherwise be a putrid mess – back into the soil to nourish other plants and animals. Of about 46 species in North America, the native Nicrophorus americanus has been on the endangered species list since 1989, possibly due to habitat loss resulting in lower numbers of suitably sized carrion to use for rearing their young. While these beetles can dine on larger dead critters, they will not reproduce and raise a brood of larvae unless they have an appropriately sized animal in which to make their home and get sustenance from.

What can you do to ensure that these fascinating and useful beetles are around to do their good work? First of all, you can strive toward having a positive attitude about beneficial insects. Just having read this, perhaps you learned something new about these fascinating beetles. Try engaging in a bit of “insect tolerance” and encourage others to do the same. Most insects do not harm, vector disease or threaten you, your home or your plants. Next, consider increasing the diversity of plants and beetle habitats around your house, yard or farm.

Want to learn more? HERE is a cool, short video that gives you an up close and personal look at these cool insects.

Black Soldier Flies… and your next meal?

I wonder… what cadence song would a soldier fly hum as it dined in your compost… Hmmm?  That’s right!  Let’s talk about Black Soldier Flies!  While most of us get annoyed and even repulsed by “flies” as they buzz around our house, land on our food and fling disease-causing microbes all about, there is an extraordinary fly in our natural world. These large, sleek, black insects may resemble a wasp but are harmless to humans.

Soldier flies are found in all temperate regions world-wide, and are often associated with food and animal waste piles.  However, because most of their life is spend in the larval stage, you’d need to dig down in the compost heap to find the large grubs.

Their latin name, Hermetia illucens, is derived from the transparent regions on the adult’s abdomen that give the illusion of a narrow waisted wasp.  It is possibly the mimicry of a wasp (they have longer legs and antennae than many flies) which helps the Soldier Fly avoid predation.  Besides the essential ecological service they provide as a decomposer, let’s look at some other cool facts, and even take a peek into the future!

But… why stop at feeding farm animals?  When we look to the future, we see a need to both deal with the waste and food requirements of our burgeoning human population. While the U.S. is way behind in the consumption of insect protein, we definitely have a growing interest in the technology of recycling “solutions.”  Reclaiming the energy otherwise lost in organic waste is a growing need here in America, especially since statistics show that our landfills now consist of over 12% uneaten, wasted food.

However, go find out for yourself!  A quick online search for the Black Soldier Fly Larvae reveals all sorts of interesting material – from feeding your flock or fish, to rearing your own edible grubs indoors.  I hear they taste like potatoes (and if I try them I will be sure to write about it!)  Meanwhile, remember to identify the insect that buzzes near you. It may be a pest… but it just may be a GOOD soldier! 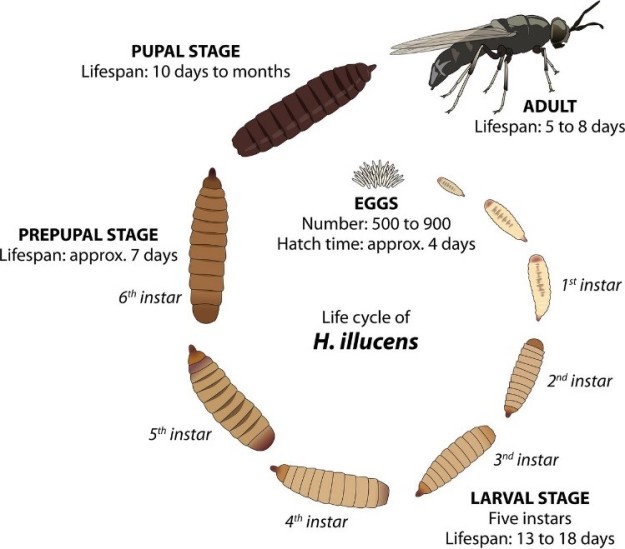 When attacked by pests, a plant cannot run away to escape, but over time it can develop resistance through structural adaptations such as thorns, spines, bitter flavors, or volatile chemicals.

Many plants have evolved subtle methods of self-protection in the way of chemical defenses. Beyond just repelling insects that feed on them, some plants create toxins that can interrupt an insect’s growth cycle, interfere with its ability to digest the plant material or even poison them! But did you know they can also attract their own beneficial insect army? That’s right! Some plants, such as our native red elderberry or my favorite, the lovely peony, can actually “call for backup.”

Many people are unaware that about 2,000 plants in more than 64 plant families have been identified as having “extrafloral nectaries.” These little sugar factories are found apart from the flowers, often under leaves or in small structures at stem nodes.

So how do these extrafloral nectaries work for plant self-protection? They provide a sweet nectar reward to attract carnivorous insects – their defensive army against bugs that want to feed on the plant! Additionally, plants have adapted methods of releasing this nectar when it is needed to attract their army, and reabsorbing it when they are safe from attack!

As well as preying on plant pests, some of these “soldiers” need or benefit from the nectar as an alternative food source during at least one stage in their life.

Besides ants, ladybugs, tiny parasitic wasps and green lacewings, other beneficial predatory insects that are attracted to these extrafloral nectaries include the Syrphid Flies!

This high energy flying requires nectar as a fuel source, but after reading that they have been estimated to feed on up to 1,200 aphids in their larval stage, less swatting may be in your future.These little cuties are also known as hover or flower flies – and there are over 300 species on the West Coast. As their name implies, these guys can hover mid-air. Even though they resemble a bee, these two-winged insects have only one pair of flying wings, as their second pair of wings (called halteres) have been modified to allow them to function like mini gyroscopes, permitting a quick direction change if swatted at by a startled gardener.

What is fuzzy like a bee, has a pokey-thing on its front end, and hovers like a hummingbird?  It is a Bee Fly!  This little fly is a great pollinator where it can be seen hovering over blossoms using its extra, extra-long proboscis (tubular mouthpart) to suck up nectar. However, it is often mistaken for a small bumblebee! Here are some of the key differences to become familiar with:

* The Bee Fly has an extra long proboscis compared to its body and can hover with an extended tongue as it feeds on blossoms (whereas bees land on & crawl into the flowers they feed upon!)

* A Bee Fly’s body is shaped like a triangle but bees have an elongated oval or hourglass shape.

* It has classic large beady “fly” eyes held close together on their head.

* They have L-O-N-G legs and hold their rear pair behind them when in flight!

* Speaking of flight, if seen at rest, you may carefully observe that the Bee Fly has only one pair of wings… while bees have two!

Being a fly, it does not collect pollen for feeding to larvae, and has no pollen baskets on the legs, unlike female bumblebees, some solitary bee species, and honey bee workers.

June 1st, 2020: New wildflower discovered near the farm! Actually, it isn’t a flower in the typical sense, but a saprophyte, a plant that derives its energy from dead and/or decaying organic matter rather than from photosynthesis and carbohydrates. And actually, this plant doesn’t even have leaves, but rather just little brown scales that you can see between the flowers, held up close against the thick stock (when the plant was little, it more resembled a pinecone!) 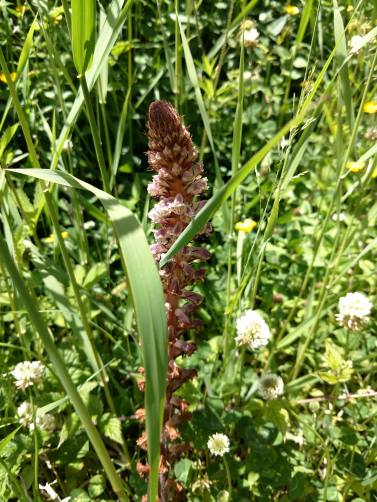 I have enjoyed watching this plant grow to about 2′ tall, and slowly unfurl it’s pretty reddish-brown flowers. It usually is found in association with pine trees, and in fact, nearby is a grove of blue spruce, Picea pungens, which it likely has a mycorrhizal-fungal association with (essentially a parasite on the spruce roots). This pinedrop is one of several species, and the tallest in our region. The native Okanagan people called it “coyote’s arrow.“

You can see more images from the U.S. Forest Service HERE or the USDA plants database HERE (where it is listed in some regions as endangered or threatened.)

Because flower stalks may not appear every year and are difficult to start from seed, this little wonder is best left to be enjoyed right where it is! In fact, each plant flowers only once, and the withered, brownish stems may remain upright for several years before falling over.

For cool details about how this plant achieves pollination (is it buzz pollination by bumblebees or self-pollinated?) visit the Botanical Society of America. For information about possible medicinal or culinary uses (not endorsed by myself!) visit Plants for a Future. However, given its rarity and beauty, I will not harvest this one!